Industrial greases have evolved over the years and are an essential part of millions of components across the industries. There are literally hundreds of variants available to choose from but the overall ignorance and lack of knowledge still persists when it comes to choosing the right grease for the given machine or component.

Greases are classified into nine consistency grades (000, 00, 0, 1, 2, 3, 4, 5, 6) established by the National Lubrication and Grease Institute (NLGI). NLGI #000 greases are nearly fluid, while NLGI #6 greases are nearly solid. The most commonly used grease is NLGI #2 & #3. The popular industry nomenclature is EP2 & EP3 greases.

One of the prominent reasons for the popularity of MFG greases is their overall best price-performance ratio. Industrial users often find it convenient to use MFG grease since by default they fit into standard applications without a need for an elaborate assessment and whenever the user is not very clear on which grease to use.

Dominance of Lithium based greases

Lithium based EP2, EP3 grease has been the most commonly used grease due to its all-round properties in terms of withstanding high temperature and water resistant properties. It is so commonly used - it is estimated it accounts for 75% of all lubricating jobs across all industries globally.

Over a period of time, technological advancements have made available superior alternatives to Lithium as a MFG thickener material, the most promising being Calcium Sulfonate. However, due to industry user’s years of comfort and largely owing to the cost economy, the Lithium based EP2, EP3 greases have enjoyed customer patronage and larger market share.

Till 2021, Lithium based MFG greases were selling cheaper than the Calcium Sulfonate based MFG greases. But come 2022 and the cost of the former started increasing mainly due to rise in the core raw material prices.

On the global front, circumstances have changed rather dramatically and suddenly by March 2022. There has been a spike of 80 to 120% in the prices of Lithium variants (viz. Lithium Carbonate used in making batteries and Lithium Hydroxide used in making greases) worldwide leading to inevitable price increase for the popular EP2, EP3 type MFG greases. 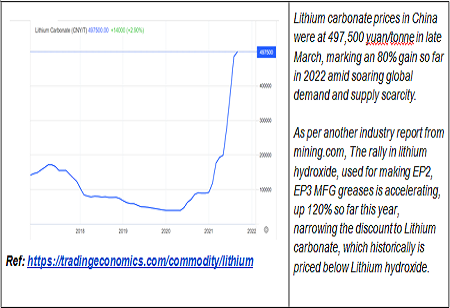 The blessing in disguise

This is a kind of blessing in disguise for the users across industries. They now have a strong techno-commercial case to switch to the superior Calcium Sulfonate based MFG greases.

Various studies and reports by industry evangelists have concluded that Calcium Sulfonate thickener based MFG greases have exhibited superior performance over the Lithium as well as Lithium complex thickener based greases. One such reference article (see above table) published in the renowned industry publication - The Machinery Lubrication quotes “Calcium sulfonate, by virtue of its thickener property, provides excellent water-resistance properties and does not break down even in the presence of water. However, limitations with calcium-sulfonate greases are their inferior pumpability and cost.” The industry has since moved ahead with improved pumpability of Calcium Sulfonate based MFG greases.

Why the sudden surge in Lithium prices?

There are multiple reasons being discussed as to why the Lithium prices have suddenly increased and whether these will cool off to the earlier levels anytime soon?

Some industry experts are saying that the prima-facie trigger seems to be the current war situation between Russia and Ukraine. While this may be true to an extent, there seems to be a larger impact due to another key reason for the Lithium price increase over the last year i.e. exponential demand for electric vehicles which run on Lithium based batteries.

Conclusion and the way forward

If one looks at the situation holistically, it can be concluded that this increasing price trend in Lithium could be irreversible in the foreseeable future. What it means for the MFG greases manufacturers and users is that, the erstwhile price advantage of the Lithium based EP2, EP3 type MFG greases could be gone forever. The price-benefit scale currently is clearly tilted in favor of the superior Calcium Sulfonate based MFG greases.

Talking in our context as a manufacturer of both these types of MFG greases, we at Molygraph lubricants are seeing a clear surge in demand for the superior Calcium Sulfonate based MFG greases from our own customers as well as new buyers who were earlier reluctant to switch from the cheaper and popular EP2, EP3 type MFG greases.

However, before this changeover from Lithium based grease to Calcium Sulfonate based grease, one needs to do an assessment of ‘compatibility’ through the application expert. Though there is a good material compatibility between Lithium and Calcium Sulfonate, one needs to take a holistic look at other parameters such as operating conditions, surface chemistry, process chemistry and the compatibility between other ingredients of the grease viz. The base oil and the additives used.

Having ensured the application compatibility for a smooth changeover from Lithium based to Calcium Sulfonate based multi-functional grease, there seems to be a sustainable merit in this transition for the industry users.