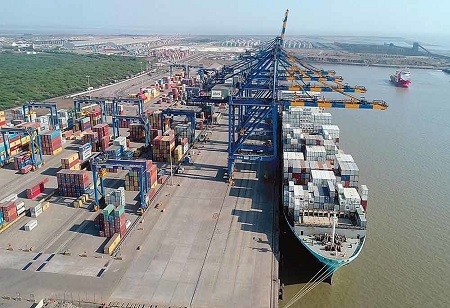 At the Maritime India Summit 2021 today, Prime Minister Narendra Modi announced that India is going to invest more than Rs 6 lakh crore by 2035 in ports as part of the Sagarmala project. The programme is part of the government’s initiative to boost the performance of India’s logistics sector.

“The Sagarmala project for promoting port-led development was announced by the government in 2016,” PM said. “As part of the programme, more than 574 projects at a cost of 82 billion US Dollars or Rs 6 lakh crores have been identified for implementation during 2015 to 2035,” he added.

The prime minister said that his government was focused on upgrading the current infrastructure as well as creating next-generation ones. He pointed out that the results of the government’s target were visible.

Modi said Indian ports now have Direct Port Delivery and Direct Port Entry systems as well as an upgraded Port Community System that enables easy data flow. He said that the government was also investing in developing storage facilities at the ports.