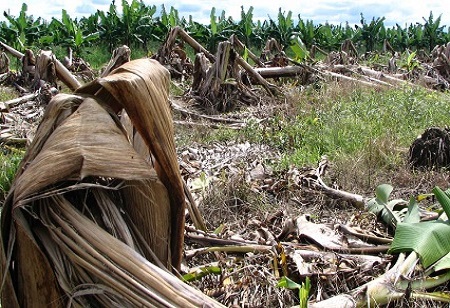 Machinery to be Developed to Utilize Banana Waste

National Research Centre for Banana, Tiruchi, is going to develop a small machinery to extract banana fiber and utilize the sap, central stem and other waste for making various products. The initiative has been launched by the NRCB in partnership with the Indian Institute of Information Technology Design and Manufacturing Kancheepuram (IIITDM Kancheepuram) and Gencrest, an industry partner.

They have been brought together at the behest of Mylswamy Annadurai, Vice-President, Tamil Nadu State Council for Science and Technology and Chairman, National Design and Research Forum, a NRCB press release said.

In Tamil Nadu, banana is cultivated in more than one lakh hectares and more than 10 million tonnes of waste is generated after the harvest of bunches. The initiative aims at managing the humongous quantity of bio-waste. According to a report by the Hindu, an agreement was signed to develop pilot scale machinery for extracting more than three tonnes of banana fiber every day and utilize the sap, central stem and scutcher for producing a variety of products.

On the occasion, Dr. Mylswamy observed that banana cultivation generated approximately 80 million tonnes of pseudostem waste per year, but it was not used well despite its huge industrial potential. Banana fiber could be used in textiles and scutcher waste generated after extracting the fiber could be used as acoustic and aircraft panels and self-healing composites.

Banana sap can be used as an organic liquid nutrient for enhancing the yield of fruits and vegetables and reducing the carbon footprint, he said and added that the collaborative venture will hugely benefit the banana farmers in multiple ways.