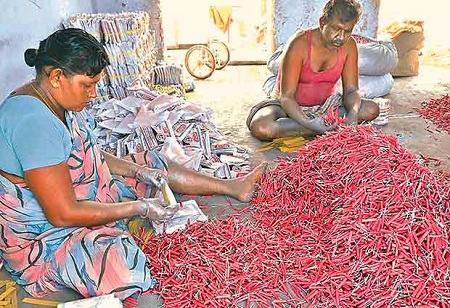 28 cracker manufacturing units in Virudunagar district have been temporarily shut down.  Seven inspection teams, including officials from various departments and bodies such as Revenue, Police, Fire and Rescue, Industrial Safety and Petroleum & Explosive Safety Organisation (PESO), suspended licences and temporarily sealed 28 cracker manufacturing units after a round of surprise checks.

The crackdown came on the heels of the government ordering a probe into a series of firework accidents, the most recent of which claimed more than 29 lives and left more than 40 injured last month. On the direction of the district revenue officer, the officials conducted surprise inspections at various firecracker units in the district. Each team was given the responsibility to inspect 10 units a day.

Speaking to Indian Express, District Revenue Officer R Mangalasubramanian said many of these units allowed employees to work outside the allocated sheds. “There are sheds meant for specific purposes. Improper ways of allowing finished goods to dry, dumping all the semi-furnished goods, raw materials, black fuses together in one area, manufacturing items beyond capacity, working in open spaces are some of the violations we observed at these units,” he said.