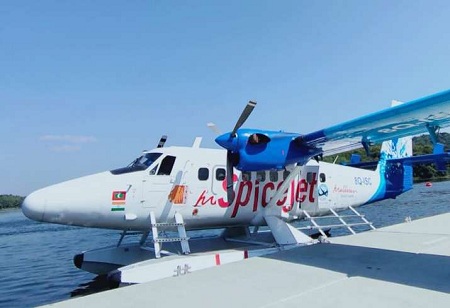 To boost seaplane infrastructure in India, an inter-ministerial meeting was held recently by officials from Aviation Ministry and Shipping ministry. If sources are to be believed, the government is planning to build more than 10 aerodromes for seaplane services across the country.

The decision is coming in after the launch of maiden seaplane service by Prime Minister Narendra Modi in Gujarat's Narmada district on October 31. The plane carrying Prime minister had landed on waters of Sabarmati Riverfront in 40 minutes after covering a distance of 200 km.

In the last meeting, officials from both the ministries discussed and strategized a plan on probable locations and routes where aerodromes could be set up. In this regard, the Airport Authority of India has also reached out to Inland Waterways authority of India to conduct a hydrographic survey of identified locations.

Ministry of Shipping has reviewed certain routes which include potential locations around Tehri Dam in Uttarakhand, Guwahati riverfront and Umrangso reservoir in Assam, Khindsi Dam and Erai Dam in Maharashtra, Prakasam barrage in Andhra Pradesh, Minicoy and Kavaratti in Lakshadweep, Havelock, Neil islands in Andaman & Nicobar.

The government also reviewed a plan on setting up water aerodrome buildings and gloating jetties across potential locations.