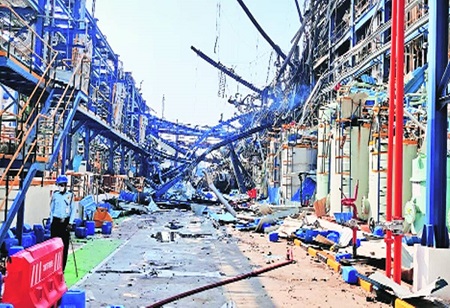 After a fire broke out at UPL’s agrochemical plant in Bharuch causing an explosion killing two and injuring more than 20 people, the state government has ordered for its closure. The explosion happened in the wee hours yesterday at Unit 5 of UPL’s Jhagadia plant in Bharuch district.

According to official sources, at least two people died, 20 were injured and five are still missing. A closure notice for the entire plant has been issued, said an official with the Director Industrial Safety and Health (DISH), adding that operating the plant is a safety risk. He said the closure would take place gradually as immediate shutdown of a chemical unit may lead to another accident.

UPL said in a statement that there was a fire followed by an explosion at approximately 1:35 am on Tuesday at one of its plants. The plant had been shut since February 5 for its annual boiler inspection.

“Since the plant was shut, there was no chemical reaction in progress. There were no chemical or gas leaks because of the fire/explosion either during or after this incident. Given the intensity, prima facie, it appears that the fire may have been caused due to fire/explosion in the solvent which could have been caused due to electric short circuit. We do not rule out possible foul play, as there was no operation at the plant,” said the statement.

Triton EV to Enter India Market, In Discussion with Gujarat and UP Governments