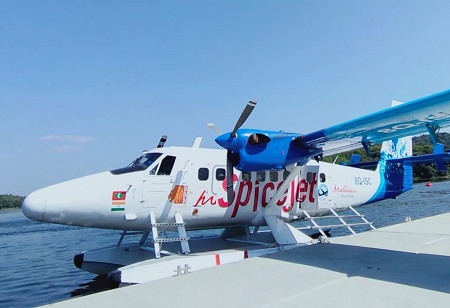 Seaplane Services to be Extended to New Routes

Government plans to start seaplane services on numerous new routes after the launch of the seaplane service between the Statue of Unity and Sabarmati Riverfront, said Union Minister Mansukh Mandaviya. The proposed routes include Delhi-Jaipur, Delhi-Udaipur, Delhi-Jodhpur and Delhi-Badrinath among others, the ports, shipping and waterways minister told reporters here.

The minister said the proposed services would also cover various islands of Andaman & Nicobar and Lakshadweep, Guwahati Riverfront and Umranso Reservoir in Assam, Yamuna Riverfront / Delhi (as hub) to Ayodhaya, Tehri, Srinagar (Uttrakhand), Chandigarh and many other tourist places.

These will be developed through collaboration between the Ministry of Ports, Shipping and Waterways and the Ministry of Civil Aviation, he said. Sagarmala Development Company Limited (SDCL), a CPSE under the shipping ministry, has invited Expression of Interest (EoI) from airline operators for seaplane services.

No separate budget has been provided as of now for this initiative, as per the ministry, and the objective of the EoI is to assess the interest of the airline operators for joint development and operation of the seaplane services with SDCL. Earlier, Mandaviya had said development of 14 more water aerodromes is being planned pan India under the RCS-UDAN (Regional Connectivity Scheme - Ude Desh Ka Aam Nagrik).

Borosil Renewables to Set Up New Plant in Kutch